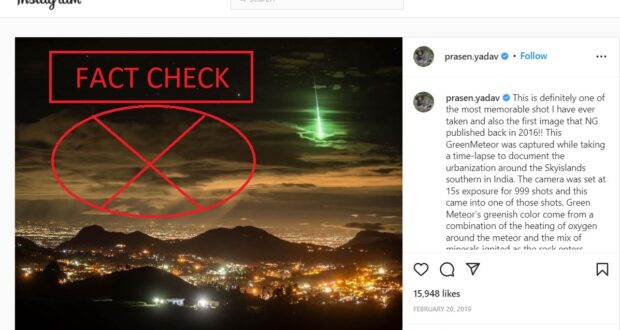 An image of a green streak of light in the night sky is being shared on WhatsApp and other social media platforms with the claim that it is an asteroid that flew-by the earth just missing to hit our planet. The message further claimed that “This is that asteroid that just missed earth about a day ago, in the skies over India”. 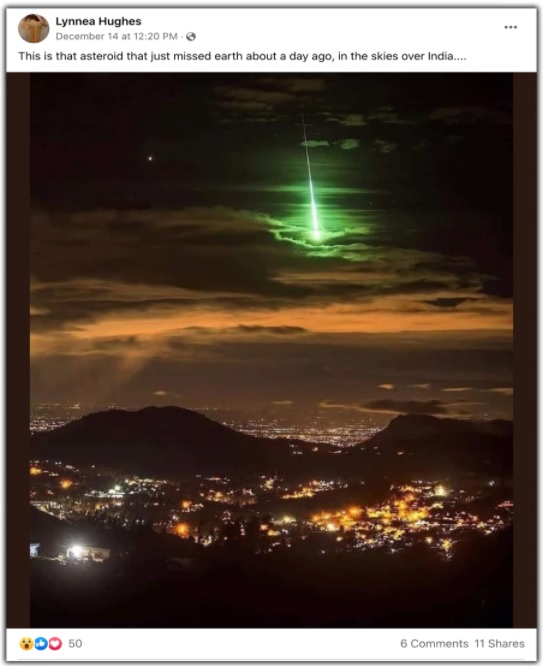 It was also shared with remarks on Twitter here.

Since asteroids passing by the earth is not new, and tomorrow and the day after will witness asteroids flying by the earth as per NASA, the image has gained wider attention. However, it resembled that of a meteorite often captured than the asteroid. When the Digiteye team took it up for fact checking, and in Google reverse image search, we have found that the viral image was published by the National Geographic more than six years ago.

Photographed by Prasenjeet Yadav when he was taking pictures in the Western Ghats in 2015, his camera accidentally captured a green streak of light across the night sky. The picture was published in 2016. The caption read:“A rare green meteor appears above the sky islands of India’s Western Ghats mountains.”

It stated that Prasenjeet Yadav had “won a National Geographic Young Explorers grant to document “sky islands,” the isolated mountain peaks that rise above the clouds along a 400-mile swath of the Western Ghats.”

The article explained how he was able to capture it. On October 9, 2015, Yadav set up his camera on the mountains of the Western Ghats to click the landscape and skies at night. It was in auto mode to take 15-second exposures every 10 seconds until 4:30 am.

The next day, he found this amazing photo of a green streak of light across the night sky. In 2019, Yadav posted this photograph on Instagram and wrote, “This is definitely one of the most memorable shot I have ever taken and also the first image that NG published back in 2016!! This Green Meteor was captured while taking a time-lapse to document the urbanization around the Sky islands southern in India.” 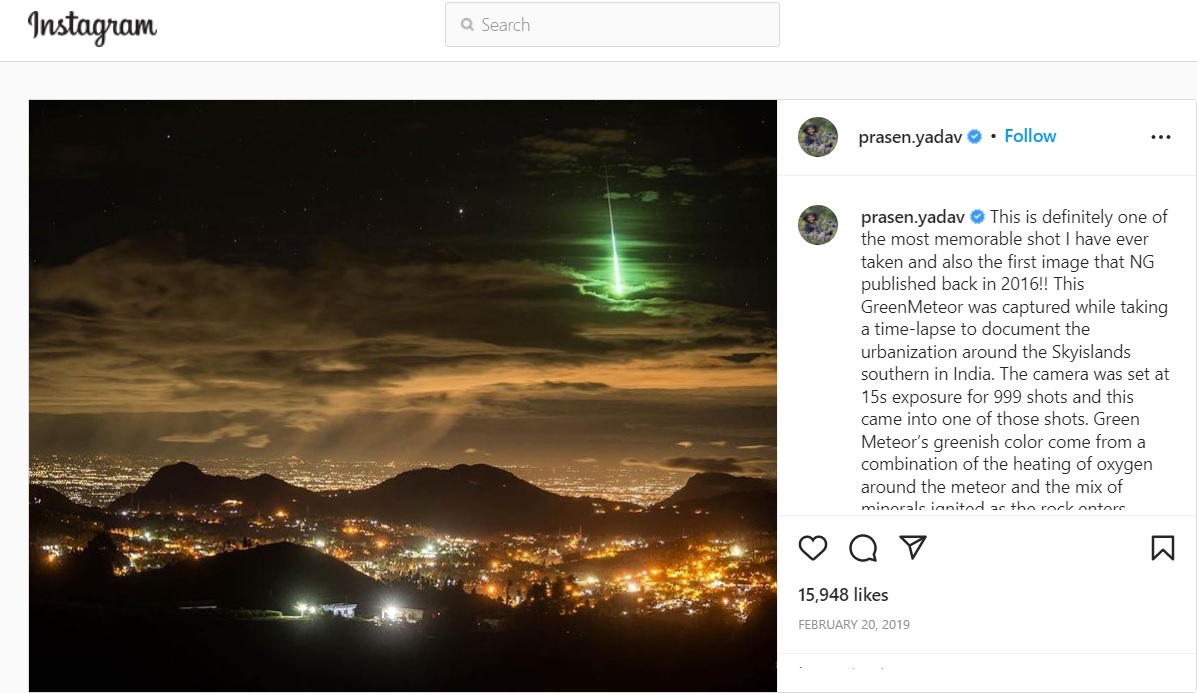 Asteroids are larger than the pebble-sized objects known as meteoroids, which fall as flashes of light called “shooting stars” sometimes seen streaking across the sky. When they enter the earth’s atmosphere and hit the ground, they are called meteorites. Taking photographs of a meteor shower requires pre-planning and often depends on luck.

Hence, tha image is not of an asteroid but the image of a meteorite taken six years ago by Ydav.

Claim
This asteroid – caught on camera in the skies over India – just missed hitting earth in December.
Conclusion
The viral image is that of a meteorite photographed six years ago by photographer Prasenjeet Yadav in 2015 when his camera accidentally caught a green streak of light across the night sky.