BJP MLA from Goshamahal in Hyderabad, T Raja Singh, is not new to controversies ever since he declared last year that those who have not attended any RSS shakha are not Hindus. This time around, a photo collage is spreading on social media with a claim that his sister Maya Devi has converted to Islam.

The image is going viral on Facebook claiming that her brother disowned her after her conversion to Islam. The woman in the image is wearing a hijab in one photograph and in another not wearing it to reiterate the description in the social media message that she did convert to Islam.

However, Digiteye India undertook the claim for fact check and found that the claim was not true.

When the image was checked on Google Reverse Image search, a photo of an entirely different girl from Kerala popped up the results. The woman is Athira, a Hindu woman from Kerala’s Kasargod district, who had converted to Islam way back in 2017 and changed her name to Ayesha. 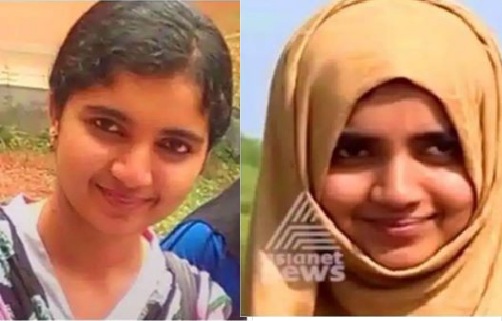 She hit the news widely when she re-converted to Hinduism after a few months and it was widely covered on Malayalam news channels including the “Asianet news” on July 28, 2017.

Here’s what BJP MLA T Raja Singh, himself said on his social media to deny the claim:

Some fake news spreading over internet that my sister is converted to Islam which is totally false propaganda.

The girl in the picture which is circulating is From Kerala.

Conclusion: The claim is totally false ?????