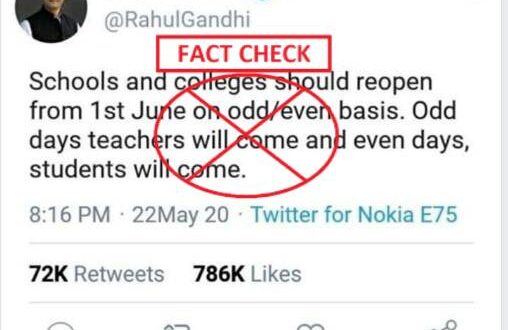 A screenshot of a tweet allegedly by Rahul Gandhi is doing rounds on social media. Digiteye India Team also received the screenshot for fact-checking on its WhatsApp fact check number. The tweet allegedly by Gandhi reads “Schools and colleges should reopen from 1st June on odd/even basis. Odd days teachers will come and even days, students will come”. 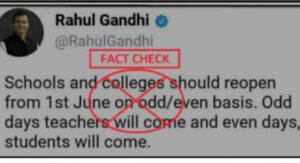 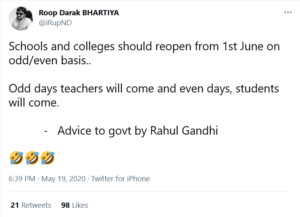 The timestamp is not visible in the screenshot. Digiteye India team conducted an advanced Twitter search on Gandhi’s tweets to see if he had tweeted anything similar. The advanced search showed zero results.

We also found out how this tweet has been going viral since May 2020 when India was still under lockdown. The message has also been attributed to Delhi Chief Minister, Arvind Kejriwal as well in the past. We searched on Kejriwal’s Twitter and found zero results. 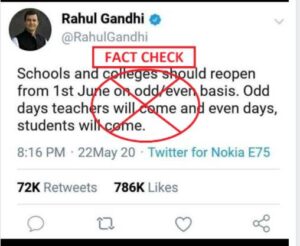 However, on May 22, Gandhi had not tweeted anything about the opening of schools or colleges. On May 22, he did tweet twice. His first tweet read, “I’m sorry to hear about the air crash in Pakistan in which many lives have been lost. News of survivors is a ray of hope & I pray that there are many miraculous stories of survival tonight. My deepest condolences to the families of those who have perished.”

His second tweet had a video of him talking to migrant workers which read “A few days ago, I met a group of migrants walking hundreds of km from their worksite in Haryana to their village near Jhansi, UP. Tomorrow, 9 Am onwards, watch their incredible story of grit, determination & survival on my YouTube channel”. 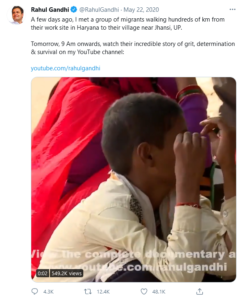 All his tweets are tweeted from an iPhone. This detail is visible in his tweets.

Rahul Gandhi said, “schools and colleges should reopen from 1st June on odd/even basis. Odd days teachers will come and even days, students will come”.

Conclusion: The tweet is fake. No such suggestion was tweeted by Rahul Gandhi.