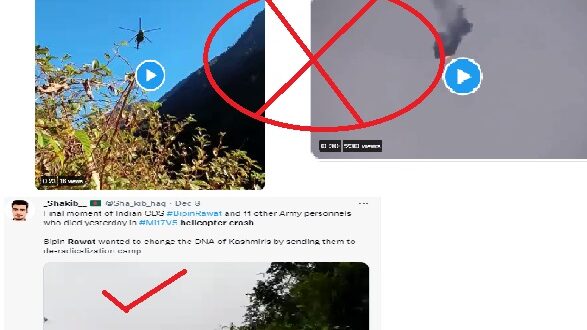 When India’s Chief of Defence Staff Gen Bipin Rawat’s chopper crashed in Coonoor, Tamil Nadu on Dec. 8, 2021, several videos began to surface on social media. Essentially there were three videos which were shared widely on WhatsApp and Twitter. Here they are:

Bipin Rawat wanted to change the DNA of Kashmiris by sending them to de-radicalization camp. pic.twitter.com/fKRH5EXrX3

All the videos claimed that they are of the chopper in which Gen Rawat was flying before it crashed. They had gone viral in social media and several requests reached Digiteye India on its WhatsApp helpline number for fact checking or authenticity of the video.

Digiteye India team took it up for verification and authenticity. The first video, when checked with a frame image in Google Reverse image Search, it provided link to a video that was old and related to Syrian chopper crash. See the original video on Youtube here.

The original video was uploaded by The Telegraph, a UK news publication, on its YouTube channel on February 11, 2020 with a title:”Syrian helicopter shot down by rebels in Idlib.” The Syrian air force helicopter was shot down by rebels in Nayrab, part of the eastern Idlib. The crash was also reported by news agencies such as Reuters and Associated Press. It was almost two years before Gen Rawat’s chopper crash and hence false.

In the second video, the landscape diferes from the topography captured live by TV channels so far and secondly, it shows that of a crash in Aunachal Prades three weeks ago and was widely covered by Indian media. Here’s the video uploaded by Hindustan Times:

a foreigner rushing to the crash site. In Gen Rawat chopper crash, the local tea estate workers were seen in TV news channels and no foreigner. Hence, it has no relevance and is false.

The third video that is making rounds in social media is taken by a local tourist family walking on the railway treack and capturing the chopper flying low and entering the cloudy atmosphere. The person appeared before the Tamil Nadu police as part of the investigation and it was found to be true video capturing the last moments of the crashed chopper carrying Gen Rawat, his wife and more than 12 military personnel. It was shown on almost all TV news channels.

of two videos but one video is true —