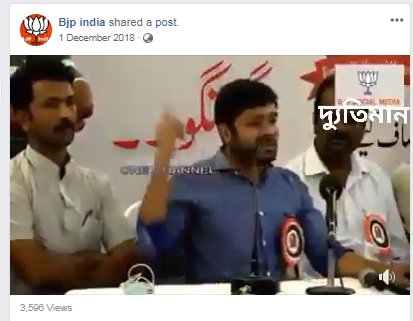 Screenshot of Kanhaiya Kumar's video being shared on Facebook

Clipped video shows Kanhaiya Kumar speaking as a Muslim himself, what’s the truth?

A clip showing former JNU student leader Kanhaiya Kumar speaking as if he is a Muslim, despite the fact that everybody knows that he is a known Communist Party of India member. Here’s the clipped video circulated by BJP India on its Facebook page:

Seeing the video, people tend to believe that Kanhaiya Kumar was speaking as if he was a Muslim by religion.

The reverse video search traced the original video to a seminar titled ‘Dialogue with Kanhaiya’ that was held in August 2018 in Nanded, Maharashtra. The full video shows that Kanhaiya Kumar was quoting Azad. But clipping the video, it was made to show as if Kumar was saying this. It was one of Azad’s most famous speeches made on October 23, 1947 in Jama Masjid, Delhi. Quoting it though not verbatim, Kanhaiya Kumar said:

“Standing on the stairs of Jama Masjid, India’s first education minister Maulana Abul Kalam Azad said that this nation belongs to us all. We will not leave just because someone asks us to, because this nation’s soil also has our blood and sweat. Our history is attached to this country. Not all of us have walked from the Arab world but were born and brought up here. People left the old religion and embraced this religion (Islam) because there was untouchability in the old religion. This religion talks about peace and equality. There is no discrimination in mosques. This is why we have embraced this religion and will not leave it. This is when Indian Muslims decided to stay in India.”

Using only the second part of the video, without bringing the initial reference to Azad, the tweaked video on Monday, Nov. 12, 2018 went viral and even director Vivek Agnihotri re-tweeted it with a message that said:“The messenger of Urban Naxals and the prophet of partition is talking about his religion publicly.”
See his tweet and the clipped video below:

The original video, a 34:31-minute video was first posted by One Channel but in the second video, One Channel logo was replaced with a Bengali word ‘dyutimaan’, indicating that it was intentionally edited by miscreants to spread falsehood.

Here’s the original video in full that was uploaded on Youtube by One Channel:

Conclusion: A video clipped to show the speaker in a different sense has been tried in this video, which is fake. Our rating for this news is ????? (Totally False).