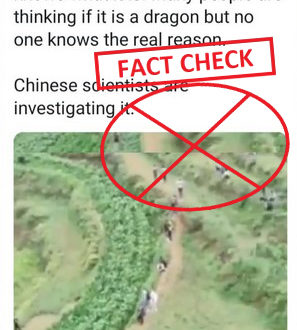 The video claims that the source of the sound is unidentified and it attracted experts from Beijing to study this occurrence. The video also claims the sound as an “Earthly dragon’s sound.” It also talks about how the local people believe the sound to be the voices of “people who died under the Chinese Communist Party dictatorship.” The locals allude to a Biblical reference and call it a warning bell for an impending doomsday.

The video has been shared multiple times on social media. 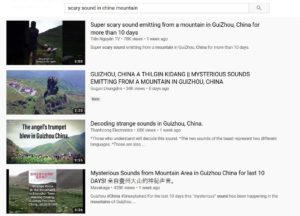 The video was shared by multiple users on YouTube 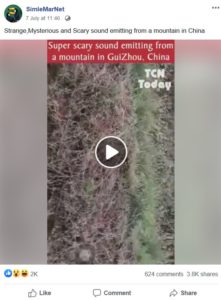 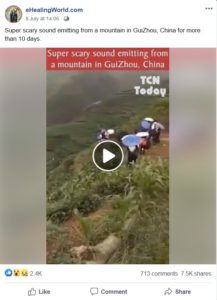 The video has a watermark of TCN Today on the top right corner. Digiteye India checked it and found it to have been published by TCN Today on their Facebook page on July 4, 2020, after which many others shared it on all social media platforms. 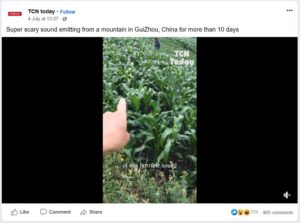 The video consists of approximately 5-6 clips which have been replayed throughout the video on the voice-over. While the sounds do seem eerie, one noticeable feature is how the sounds are exactly similar to the ones which audiences hear in horror movies and shows. To further substantiate the claim, the video talks of an earthquake of 4.5 Magnitude on Richter scale on July 2, 2020, which occurred at the source of the alleged sound. We checked published news reports and found that there was, indeed, an earthquake but the magnitude was not as lethal as shown in the video. It caused minor damage though as reported by Earthquake-Report.com.

We conducted a keyword search on Google and found out that the sound is not mysterious or scary after all. The Science Times reports that the incident took place in Xiushui of China’s southwestern province, Guizhou. While the sound was strange, it was nowhere close to what the video claims. The report claims that the mysterious sound was coming from a small bird, the yellow-legged buttonquail, which is native to the Indian subcontinent, East Asia and Southeast Asia. The sound of the bird can be heard faintly twice in the video. During the breeding season, female yellow-legged button quail‘s loud hoots can be heard at a distance as far as 100 metres.

You can hear the sound here.

“Liu Fuqiong, a local primary school teacher, told Pear Video: ‘It hummed twice or three times repeatedly every six or seven minutes. The sound was very deep. I thought it was quite strange as well. ‘A dozen of villagers followed the sound to the cornfield and chased down a yellow bird with a really short tail’, ” as quoted in The Daily Mail. The Daily Mail also reported that the local authorities have detained people for spreading rumours and doctored videos.

Conclusion: The video clip has been doctored and is being spread with a false narrative to incite fear. Our rating