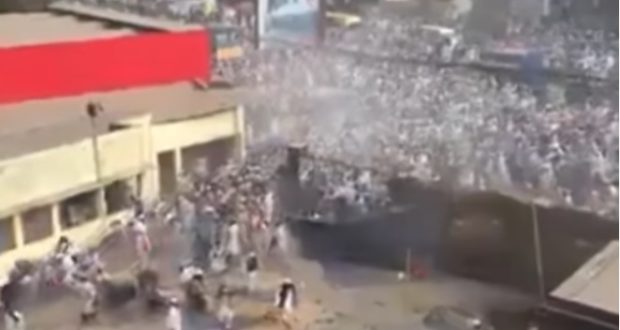 A recent video is widely being circulated among the users on WhatsApp and Facebook, showcasing violent clashes among two Muslim groups. The caption to the video in Twitter warns that not voting for BJP in 2019 elections would put them in a similar situation in the future as shown in the video, which was described as an “example of the Islamic terror.”

The video was shared by a non-profit religious group called ‘Resurgent Dharma‘, among others, stating that the incident had happened in West Bengal. It was shared widely and has already reached about 46,000 people, targeting voters in the forthcoming Lok Sabha elections this year.

The message with the video shared by one Gopal Goswami says: “A scene in your neighbourhood sooner than you imagined….. Think before you vote! Your one wrong vote can turn this country into Islamic nation very soon.”  Here’s the message that is widely shared on Facebook:

A seen in your neighbourhood sooner than you imagined…..
Think before you vote!
Your one wrong vote can turn this country into Islamic nation very soon @Swamy39 @ippatel @KapilMishra_IND @narendramodi @ShefVaidya @girirajsinghbjp @HKupdate pic.twitter.com/PTXNhZpMWB

The reverse video search revealed that this video was on Facebook since December 2, 2018, and it was originally posted on December 1, 2018, by an Islamic teaching Youtube channel in Dhaka, Bangladesh. It is related to violent clashes which took place between two factions in the Tambigi Jamaat, and more than 200 were seriously injured in the incident. Upon further research, we found out that the Bangladeshi media had already covered the news event widely.
See the video here:

In this video, devotees congregated for ‘Bishva Ijtama’, which is the second largest congregation of Muslims worldwide and it was organised by Tabliga Jamat in Bangladesh. The language being the same (Bengali), this video was used to show as if it happened in West Bengal, India. The warning attached to the video that not voting for BJP would result in similar fate is another bid to create confusion in the minds of people in West Bengal.

Conclusion: The video is real but the context is fake and untimely as it targets voters in India, seeking votes. Our rating is ???? (Mostly false).