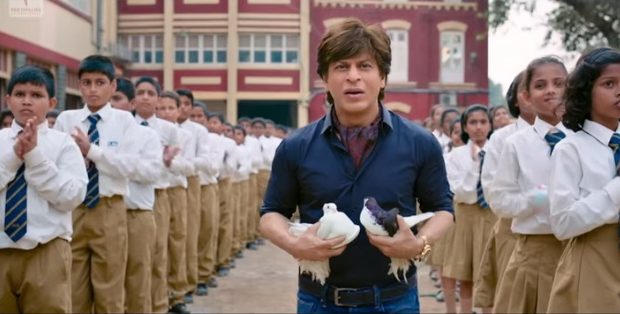 A still from the film Zero

The latest victim of fake news is actor Shah Rukh Khan’s film “Zero” that received negative and fake reviews on social media before its release. Some quoted Censor Board members to make their fake reviews sound authentic.

The tirade started with a guessing game on the number of screens the film “Zero” will be released on December 21 and it turned viral until renowned trade analyst Taran Adarsh stepped in to clarify on Twitter that the screen count of Zero is not yet confirmed.

“4200 screens? 4500 screens? 5000 screens?… Overenthusiastic souls on social media keep throwing random numbers vis-à-vis screen count of #Zero… How do these numbers originate? Fact is, the screen count will be finalised only a day prior to its release… Till then, relax! [sic],” he tweeted on his real twitter account @taran_adarsh.

Leaving him behind, another fake message on social media went viral. It quoted a pre-review of the film from the Censor Board itself and said the film was a failure. Fake Twitter accounts of well-known film critics, including Taran Adarsh hit the floor tweeting negative reviews about Zero, causing immense damage to the film much before its release.  Some tweets went ahead and wrote off the film in a few lines as seen below, posing as trade analyst Taran Adarsh, twisting the spelling of the analyst to cheat the readers:

#OneWordReview#Zero: DISAPPOINTING.
Rating: ⭐️
All that glitters is NOT gold… Holds true for #Zero… Some engrossing moments in the first hour, that’s about it… Formula-ridden plot, screenplay of convenience, shoddy direction are the main culprits… ???#ZeroReview pic.twitter.com/5Vq4h0hhrF

Many people were made to believe it as Taran Adarsh’s real account as the parody account too looked exactly the same on its opening page but for the minute spelling error. The accounts read @Taran_aadaarsh or @Taran_adaarsh confusing people besides damaging the reviewer’s name. No wonder, one reader has raised the question as below:

Umer Bandhu with a fake twitter account @MerryySandhu writes: “First Review from #UAE. #Zero An Average First Half and a Slow Second Half!”

First Review from #UAE. #Zero An Average First Half and a Slow Second Half!
Climax Rocket Scenes ??
A Good Story Line Was Missing!
Katrina KAif does a tremendous job!,?
VFX ? Direction ?
Anushka ?
My Rating – 1.25/5
⭐? #Zeroreview pic.twitter.com/9qj0y4MNzD

Half an hour later he wrote again: “Just watched #ZERO .First time in my Entire Career none of the CBFC member gave the STANDING OVATION and APPLAUDS to #Zero.”
First part – HORRIBLE
Second HALF- BELOW Average
So I give 1 for this disaster flick” and it was tweeted at 4:02 PM on Dec 19, 2018, two days before the release with ample time to spread the engativity about the film.

#Zero Got Mixed Response from Censor Board
Another @iamsrk Film got Average Response after #JHMS . Sad Time

Another wrote a tweet impersonating SRK’s wife and trying to gain mileage on spreading negativity of the film:

After watching #Zero i’m 100% sure my husband won’t get clean hit so it means 5-6 years without giving hit movie, it’s shame kind of thing for me but i would make sure @iamsrk focus more on his acting & PR activities! Sorry to all srkians but i speak from my heart..?

This apart, another wave of pro-film reviews or reviews with fake accounts imitating celebrities, including PM Modi have started appearing on social media. Here are some of them:

Finished watching #Zero A flamboyant peregrination of a minuscule geezer enlightens the big coliseum with vivacity as its nucleus . The ostentatious rectitude of @iamsrk purloins the show. #Zeroreview #ZeroThisFriday #ZeroAdvanceOpen #ZeroTheFilm #ZeroOnBMS 4.5/5

One of my best friend hv just watched #Zero and according to him the movie is fantastic, so dear Indian government i am coming to India for FDFS of #Zero please don’t arrest me. It’s humble request ? let me enjoy the movie please.#2DinZeroIn #2DaysToZero

I agree with u @realDonaldTrump! This Hindi movie #Zero is the best I have ever seen! Merry Christmas from Russia everyone! #ZeroReview https://t.co/4vCmEyyU4W

Yesterday I saw a hindi movie #zero and it was a fabulous experience. I was stunned. The visuals were breath taking. And my friend #SRK nailed the role of #Bauua
America need heroes like you sir
5 stars from my side #ZeroReview

#Zero MINDBLOWING . Get ready for the SRK masterpiece. @iHrithik & me watched it today and declared it best film of the year.
⭐⭐⭐⭐⭐
@iamsrk @aanandlrai #ZeroReview

Absolutely loved the movie, watched a heart touching movie after a very long time,
SRK ur a pure megastar and ur character Bauua reminded me of my very close friend Messi #ZeroReview

Conclusion: This story is a replica of too many rumours and unscientific reviews being widely shared to discredit an effort on the part of the movie makers. Our rating of this news is ?? (Misinterpretation)