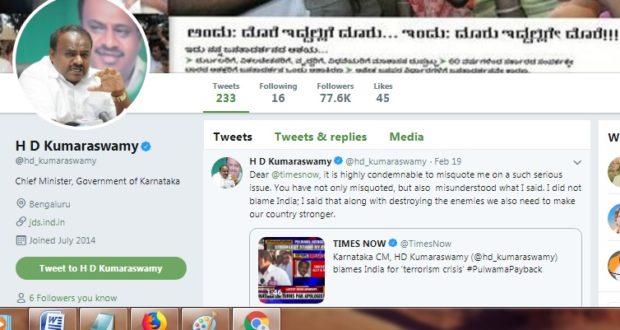 The Times Group’s English news channel Times Now played up an interview with Karnataka Chief Minister HD Kumaraswamy on Feb 19, Tuesday, in which he said one thing but the English version was interpreted as an entirely different one, leading to social media outcry against him.

TIMES NOW showed the clipping claiming that the CM said “A befitting reply is not going to take away the sorrow of the incident, the government has to take steps to ensure such an atmosphere doesn’t arise.” When asked about the demand to declare Pakistan as terror state, he “hesitates to answer and says we have to solve the terrorism crisis on our country first.”

The news was streamed with glaring headlines such as “Shocker from Cong ally and Karnataka CM”, “HDK blames India for ‘terrorism crisis’” and “Karnataka CM refuses to condemn Pak”.

Did HD Kumaraswamy really refuse to condemn Pakistan? If one goes by his words spoken in Kannada, the truth is entirely different.

Here’s the translation of his byte to Times Now channel, which came soon after the mastermind behind Pulwama was killed in Jammu and Kashmir:

The headline used here is highly dramatic and stating Karnataka CM would have been apt but bringing in the fact that he is an ally of Congress was not required and it is aimed at creating bias among the viewers that it was the stand taken by an opposition party which is an ally of Congress.

The question posed was whether Pakistan should be declared as a state supporting terrorism.

The answer by the Chief Minister of Karnataka was this: “It is not just the question of declaring Pakistan as a terrorist state but the important thing is eliminating the activities of terrorists living inside India. It can be done by gun or by taking them into confidence. This will avoid more of our soldiers from dying. The Centre should give more importance to that.”

Times Now went all out saying that the CM refused to condemn Pakistan and instead blamed India for the terrorism crisis in the country. Later, the chief minister himself reacted to the social media furore and tweeted his reply as below:

@hd_kumaraswamy:”Dear @timesnow, it is highly condemnable to misquote me on a such serious issue. You have not only misquoted, but also misunderstood what I said. I did not blame India; I said that along with destroying the enemies we also need to make our country stronger.”

Dear @timesnow, it is highly condemnable to misquote me on a such serious issue. You have not only misquoted, but also misunderstood what I said. I did not blame India; I said that along with destroying the enemies we also need to make our country stronger. https://t.co/7ocCHgw9An

Conclusion: The quote given by KD Kumaraswamy was tweaked bringing in Congress ally factor in the headline and then the misinterpretation of his quote as refusal to condemn Pakistan amounts is clear. Our rating for this news is ??? (Misinterpretation of an event or news).