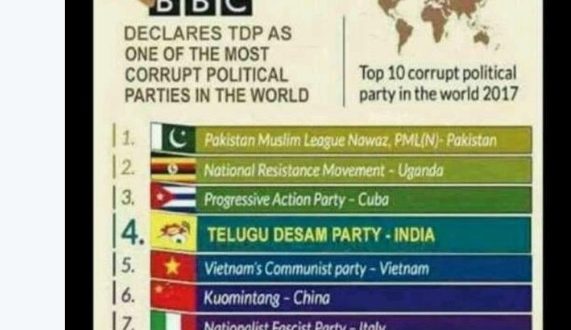 Just five days before the elections for Telangana Assembly are to be held, a fake image has started appearing in social media targeted at Telangana voters. 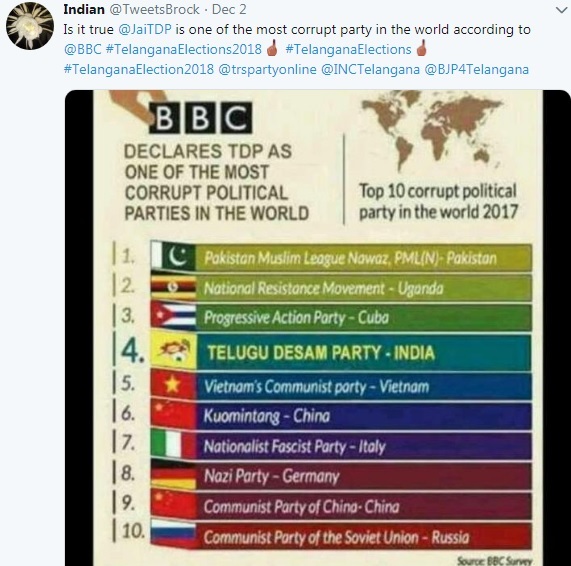 Digiteye India searched the image in Google Reverse Image search and found that it was the same source debunked by many fact checkers in the past. It was originally posted on a fake BBC website.

Earlier, this image was widely circulated on social media showing INC or BJP among others as the most corrupt party.  It seems now it has resurfaced claiming TDP holds the dubious first position and this fake story fails to die. It appears especially during elections in many countries and has made an appearance now to coincide with the state elections being held in Rajasthan and Telangana.

The website is called BBC News Hub (bbcnewshub.com), a website which has no locus standi or any authenticity. Very often, similar  news articles have been passed on as a genuine news misleading many people around the world.

A look at this story on the fake bbcnewshub.com with a title, “Top 10 List of Most Corrupt Political Party in the World 2018,” showed the Indian National Congress along with Pakistan Muslim League, the Nazi Party, Pakistan Muslim League Nawaz, National Fascist Party among others. Some of them are now defunct. The fake website bbcnewshub.com has shared many such fake posts, one of them claiming, Narendra Modi is the ‘7th most corrupt prime minister in the world in 2018’.

Though British Broadcasting Corporation (BBC) has denied the news, it keeps popping up on social media whenever elections are in full swing. This time, the image has been morphed to show TDP as the fourth corrupt party in the list.

The news circulating in social media is fake as the listicle quotes an imposter of BBC, which was found to be a fake website. It has no authentic sources or explanation on how the ranking has been made. Also, the table has some extinct world parties, which has been debunked already in the past. Our rating of this news is ????? Totally False.