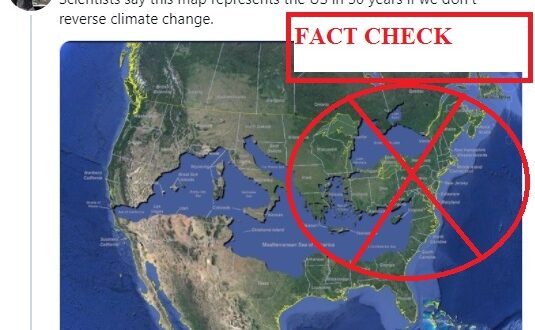 Recently, Twitter has seen several Climate Change warnings on the sidelines of the Glasgow Climate Change Summit or the COP26. One such post showed a bizarre image of a map showing most of the land features disappearing in the United States in 30 years if climate change is not reversed.

The message that accompanied the tweet read: “Scientists say this map represents the US in 30 years if we don’t reverse climate change.”

Scientists say this map represents the US in 30 years if we don’t reverse climate change. pic.twitter.com/AVvERr4Y4a

Essentially, the map shows disappearance of the three major mountain ranges in the United States with water in most areas. Since it’s really alarming, the Digiteye India team took it up for fact checking.

When we searched the image in Google Reverse Image Search, we found out that the image was an old one shared in 2015 and not the latest one. 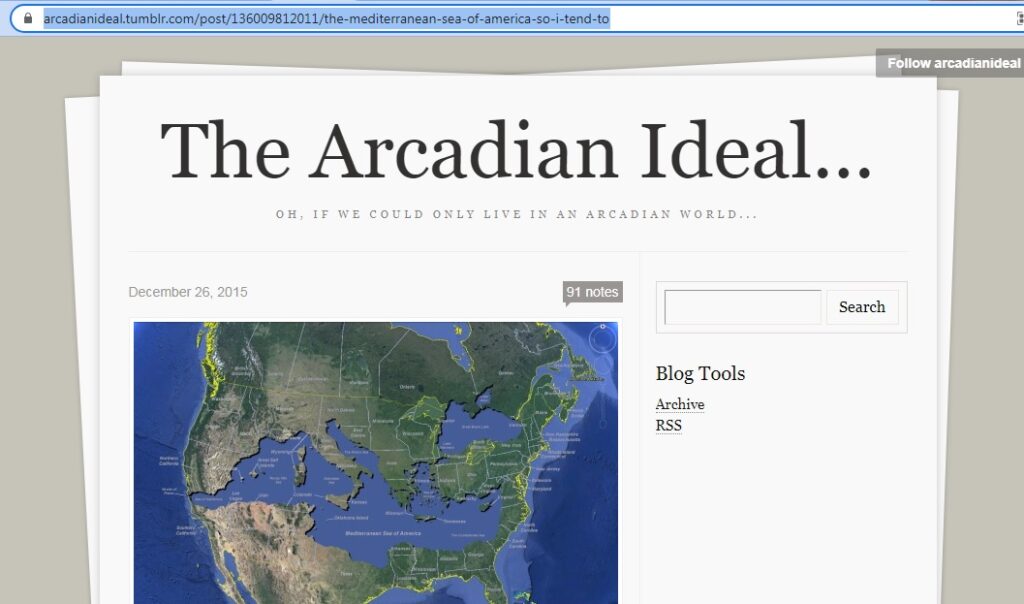 Secondly, the map was  created on http://brilliantmaps.com by a user in an entirely different context and has nothing to do with climate change projections 30 years later from now. See the original blog post on Tumblr media here:

The creator wrote: “Well, I was examining maps and globes and realized that the Mediterranean Sea is at the same Latitude as the United States. If only it were possible to rotate the Mediterranean Sea around to our side of the planet? Would it fit? What effect would this have? What about the states… new coastlines in the middle of the country… new relationships… states torn in pieces?

So, what have we done? This is a new vision of the United States of America. A few states have been unaffected by this mash-up.  Washington, Oregon, Arizona, Minnesota, Wisconsin, Louisiana, Ohio, Pennsylvania, Maryland, Delaware, New Jersey, Connecticut, Rhode Island, Massachusetts, New Hampshire, Vermont, Main and Florida. Yes, I am ignoring Alaska and Hawaii since they are remote, sorry.”

The description goes on but the fact remains that it was an imagination and has nothing to do in the context of the claim on climate change in the US.

That’s so weird bc this map is actually a map a user created on https://t.co/xoltWJAt3q and isn’t about that at all pic.twitter.com/szq5cDAypz

Yes, the Glasgow Summit saw 20 countries including the United States pledged to end direct financing for overseas fossil fuel projects by 2022. But the map has nothing to do with climate change projections.

Claim: Scientists say this map represents the US in 30 years if we don’t reverse climate change.

Conclusion: Wrong map created manipulating lots of graphical features was used by a creator in 2015 to showcase the Mediterranean Sea in the US. It has nothing to do with the claim of climate change in the US 30 years from now.

"Scientists say this map represents the US in 30 years if we don't reverse climate change" climate change in the US climate change summit Glasgow summit US in waters US map 30 years from now 2021-11-07
Gayathri Soora
Previous: Video on bananas containing Helicobacter worm is false; Fact Check
Next: Old video of flooded Mexico City Airport resurfaces claiming to be of Chennai airport; Fact Check