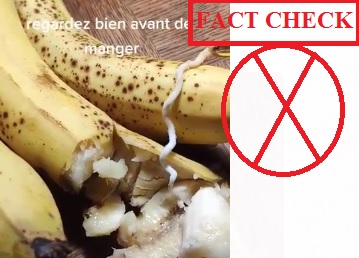 An alarming video is going viral on WhatsApp claiming that around 500 tonnes of Somali banana that had arrived in the markets, contain a worm called Helicobacter. It stated:

“Hello friends and people please spread this video as much as possible. Recently, 500 tons of bananas from Somalia arrived in the markets, which contain a worm called Helicobacter that releases poisonous bananas in the stomach, which then shows the following symptoms (diarrhea, vomiting, nausea, headache) and after 12 hours the person will die from brain death. Please refrain from buying and eating bananas these days, or if you do buy, be sure to open them inside. Watch the video:”

It was initially shared in United Arab Emirates and later reached India too. Those who circulated in India removed the fact that it was pertaining to the UAE market and not India.

The viral video claimed that the worm releases poisonous bananas in the stomach causing diarrhea, vomiting, nausea, headache, and in some cases, a patient can also die after 12 hours.

When Digiteye India received the video by many of its WhatsApp users, we took it up for fact checking to realise that it was a false video first circulated in UAE and later in India.

Responding to the claim, the Abu Dhabi Agriculture and Food Safety Authority clearly termed the video as incorrect as Helicobactor is a bacteria and not a worm. The department issued a statement saying, “The viral video on social media about Somali bananas is incorrect and contains false and misleading information, as it indicates the presence of Helicobacter, which is a type of worm. Worms are not known to complete their life cycle inside fruits when it is as big as shown in the video.”

#ADAFSA: The viral video on social media about Somali bananas is incorrect.#UAE_BARQ_EN pic.twitter.com/QdQZ2K83Qm

The authority also urged people not to believe in rumours. The authority further said it is committed to verifying the safety of all food products in the emirate’s markets, including all vegetables and fruits, whether imported or local, before allowing them into the markets.

A report in the Khaleej Times quoting Dr. Mohammed Salman Al Hammadi, Director of Communication and Community Service Department at the Abu Dhabi Agriculture and Food Safety Authority has reiterated the fact.

Conclusion: Helicobactor is a bacteria and not a worm and denied by the Abu Dhabi Agriculture and Food Safety Authority.