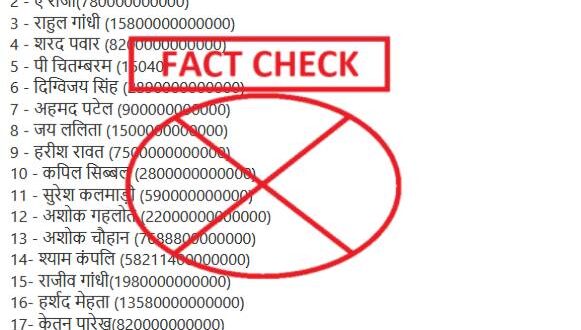 Various posts on social media claim that WikiLeaks has released the “first list” of black money holders in Swiss Bank. The post is going viral on all social media platforms. DigitEye Team also received the message on its Whatsapp fact-checking number. 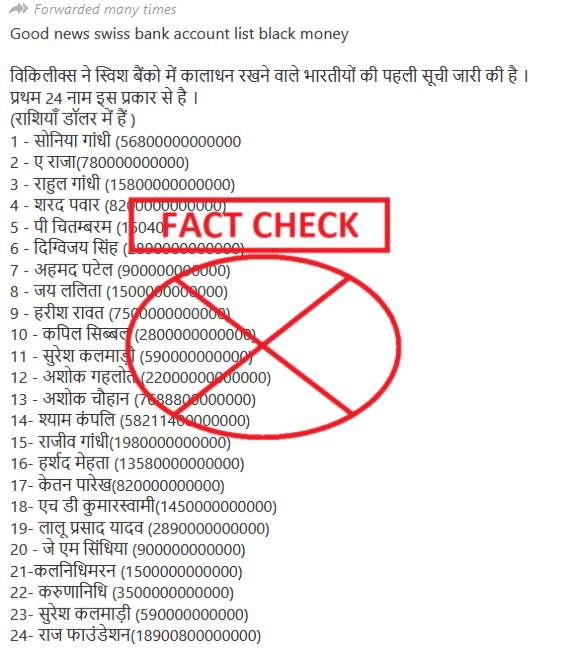 The list contains 24 names — Sonia Gandhi, A Raja, Rahul Gandhi, Sharad Pawar, P Chidambaram to name a few. All the money listed next to the names are figures in dollars. The first name on the alleged list is Congress leader Sonia Gandhi who it claimed to be holding more than $56 billion. The numbers are not in chronological order and neither the names are in any set order. According to the alleged list, the lowest amount is held by P Chidambaram.

A search of the list on social media platforms reveals that the list has been in circulation for a long time. Every year the list features the same people with the names and figures tweaked. What was also noticed is that Amit Shah, Ambani Group, and Adani Group are also featured on a similar list. In all the lists, the figures remain in the same order, only the names change. 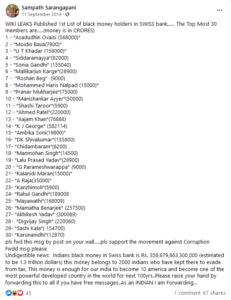 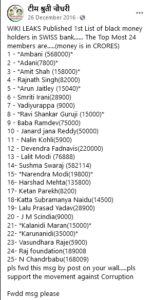 WikiLeaks has not published any report on the same on its website. The latest report was published in October 2019. WikiLeaks took to Twitter and tweeted about a similar list of Indian black money holders. In the 2011 tweet, it clarified that such list “never appeared on WikiLeaks”.

There has been no official declaration of any such list which contains the names of politicians. However, in an RTI query filed in 2019, the Finance Ministry declined to share Swiss bank account details of Indian citizens citing “confidentiality provisions” of a tax treaty signed between India and Switzerland. The ministry has also declined to disclose the details of black money received from other foreign countries too.

The WhatsApp message which Digiteye received for fact-checking contains other claims too. The message highlights the incidents which happened under the Congress government and the UPA period such as the Partition of India, Bofors scam, Kashmiri Pandits’ exodus, 26/11 attacks, removal of Satyameva Jayate from the currency notes, among others. The phrase Satyameva Jayate was first inscribed on a Rs 100 note in 1980. As the currency evolved, notes today have the State Emblem printed on them rather than the slogan, which means the same thing.

The message claims that mosques and churches do not have to pay tax citing Article 30(A) of the Constitution. According to the article, “all minorities, whether based on religion or language, shall have the right to establish and administer educational institutions of their choice.” The claim is false as the Finance Ministry in 2017 stated that all religious institutions including temple trusts, churches and mosques would have to pay GST. 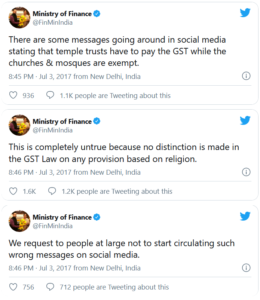 The message cites the rise in food prices including beer and pizza, the rise in railway ticket fares, etc. What needs to be noted here is the fact that the price rise has been a global phenomenon and not an issue endemic to India alone. The major reason why prices have increased is demand and globalization, and not the monopoly of any political party.

The other claims are also not backed by facts. They are, in fact, incomplete claims.