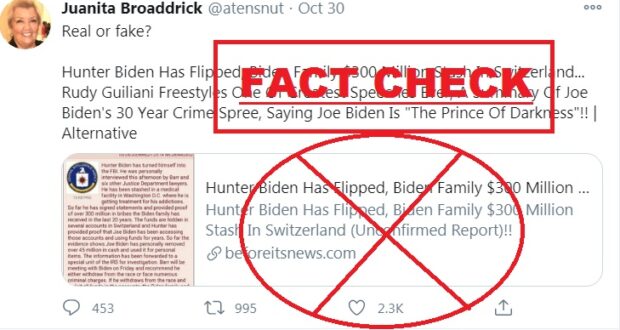 A message on October 28, 2020, just a week before the November 3 elections, stated that Biden had turned himself in to the FBI and “flipped” on his father, former vice president Joe Biden. The message posted on dubious image board 4chan’s /pol/ (Politically Incorrect) has been picked by a so-called news outlet and social media users here, here and here. This story stemming from 4chan’s /pol/ comes close on the heels of a hoax claim on Hunter Biden’s death that also originated here and later gone wild and debunked by Digiteye team last week.

Since the message on Hunter Biden apparently surrendering before FBI started going viral on twitter, Digiteye has taken it up for fact checking owing to its sensitive nature and possible impact just a week before the crucial US Presidential election on November 3, where Hunter’s father Joe Biden is a strong candidate pitched against President Donald Trump.

The malicious narrative in the message with an image read: “If (Biden) withdraws from the race and forfeits all funds in the (Swiss bank) accounts, the Biden family and specifically Hunter will not face criminal charges.”

Here’s the full message that is being circulated on social media. It reads:

Hunter Biden has turned himself into the FBI. He was personally interviewed this afternoon by Barr and six other Justice Department lawyers. He has been stashed in a medical facility in Washington D.C. where he is getting treatment for his addictions. So far he has signed statements and provided proof of over 300 million in bribes the Biden family has received in the last 20 years. The funds are hidden in several accounts in Switzerland and Hunter has provided proof that Joe Biden has been accessing those accounts and using funds for years. So far the evidence shows Joe Biden has personally removed over 45 million in cash and used it for personal items. The information has been forwarded to a special unit of the IRS for investigation. Barr will be meeting with Biden on Friday and recommend he either withdraw from the race or face numerous criminal charges. If he withdraws from the race and forfeit all funds in the accounts, the Biden family and specifically Hunter will not face criminal charges.

The message further claimed on Oct. 30, “(Attorney General Bill) Barr will be meeting with Biden on Friday and recommend he either withdraw from the race or face numerous criminal charges.”

The logo in this message has Central Intelligence Agency’s and not FBI’s, indicating falsification of the claim. See it here:

No credible news organization has reported about this alleged development. Had something of this magnitude occurred in the final week before Election Day, it would have made headlines in every news media, let alone those supporting the Trump campaign. Neither pro-Trump nor Pro-Biden campaign has picked on this wild claim.

Secondly, why should Trump supporters gather in front of AG Barr’s house demanding his active intervention almost three days after the claim that he was turning in to FBI appeared? They are demanding Barr to probe the so-called Hunter’s old laptop revelations. See the picture of Barr’s house captured by neighbors and shared on social media here:

Bill Barr has people outside his house and a white horse. How did the white horse get there and why? pic.twitter.com/38O0fwg4SM

Thirdly, this is not the first time that a similar wild claim was made against Hunter and this was another in a series of such misinformation drive being carried out to change the narrative of candidates before the final voting takes place.

Conclusion: Our rating of the claim that Hunter Biden had turned himself in to the FBI is 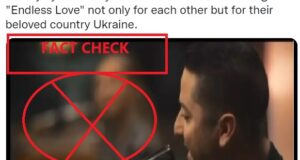