Old video of Mangolia surfaces as that of Opening Ceremony of Tokyo Olympics: Fact Check

A video of Surya Namaskar (Salutation to Sun) with a claim that it was performed at the opening ceremony of Tokyo Olympics 2020 has gone viral on Twitter and many people were sharng it with a message that it was a pride moment for India.

Surya namaskar being performed at Tokyo Olympics opening ceremony with our national flag dress code. Proud moment for us.
THANK YOU MODI JI..
🙏🏼🙏🏼🙏🏼🙏🏼🙏🏼

The same claim was shared here and here.

It’s just been an amazing honour given by #Japan to #Indians by performing #suryanamaskar a culture friendly relation @Tokyo2020 @PMOIndia @CrownNaruhito @THNewDelhi. The bond that will everlast. Looking forward for successful event aheady.Thankyou. pic.twitter.com/igcgizEkmV

Take pride in spreading our culture throughout the world..

The video lasting for one minute shows performers in tricolour-reflecting clothes doing Surya Namaskar, which has its origin and is popular in India.

Digiteye India has found that the video is unusual as Tokyo Olympics Opening Ceremony never had any such performance on July 23. When the team checked in Youtube with search strings such as Tokyo Olympics and Surya Namaskar, not a single official video appeared but one from Mongolia was thrown in search results. When closely scrutinised, it was the same video that is being shared on Twitter with the claim that it was staged at the Tokyo Olympics.

The original video was old and was related to the welcome event in Mangolia to PM Narendra Modi at the Community Reception and Yoga Event, organised by “Art of Living”, in Ulaanbaatar, Mongolia on May 17, 2015. See the original video here on Youtube:

During PM Narendra Modi’s 2015 visit to Mongolia, the event was organised by the Art of Living foundation at the Buyant Ukhaa Stadium in Ulaanbaatar, Mongolia and Surya Namaskar was part of it. The longer version of the video was shortened to one minute at 5:31 minutes reading and used in the video being circulated as part of the Tokyo Olympics. See the original tweet shared on May 17, 2015.

Conclusion: False. The original video is from Mongolia in 2015 and not from Tokyo Olympics 2020. It was a reception event for Indian PM Modi during his visit to Mongolia organised on May 17. 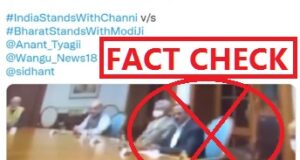 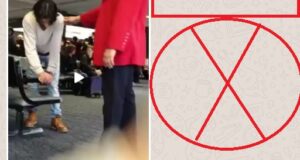