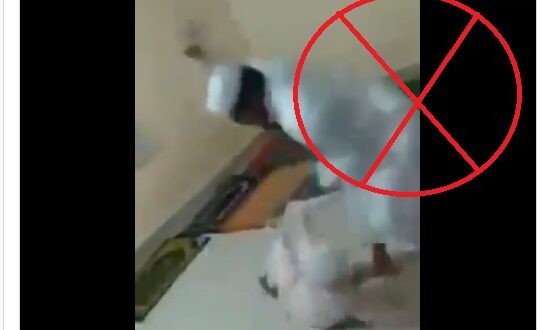 A video of a madrasa teacher has been going viral on WhatsApp and other social media platforms
bringing many parents to tears as it shows how a minor boy was being beaten up mercilessly. It has elicited outrage on social media alike.

However, the Twitter claim with the video stated in Hindi “madrasa, moulvi and Hindustan”, suggesting that  the incident in madrasa happened in India. Digiteye India received the video for fact check and owing to its viral nature, the team took it up for fact checking.

A search on Youtube with relevant strings and a Reverse Google Image search of a frame of the video took us to an old video uploaded earlier this month pertaining to an incident that took place in Bangladesh and not India.

Finally, the video has been identified with a madrasa teacher in Hathazari of Chittagong, Bangladesh. went viral on Tuesday as he was seen
beating a minor boy.

The incident sparked widespread outrage on social media. In the video, the teacher is seen repeatedly hitting the boy, who was reportedly punished for running after his mother outside of
the madrasa premises.

A local news paper, Bangla Tribune, contacted Hathazari Model police station Officer-in-Charge (OC) Harun-ur-Rashid, he confirmed: “We have seen the video. The teacher’s name is Yahiya. We along the UNO went to the spot at midnight yesterday. We had detained the teacher from there. Later the child’s family came to the police station and the boy’s father Joynal did not want to press any charges against the madrasa teacher. The boy’s family cried and begged us to release the teacher. Even the mobile court could not give him any punishment. The madrasa teacher signed an undertaking before release,” the OC said.

The report carried on March 10, 2021 has given more details but also confirms that the video belongs to an incident that took place in Bangladesh and not India.

Claim: Boy beaten up mercilessly in a madrasa in India

Conclusion: Video was true but the incident happened in Bangladesh and not in India as claimed.